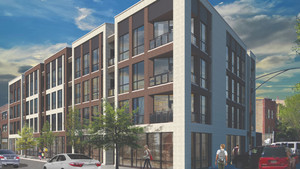 Some neighbors took issue with the rent prices, saying longtime residents can't afford it. "To be perfectly blunt, no family can afford $2,500 a month in this neighborhood," one said.

AVONDALE — The team behind the Red Apple Buffet redevelopment project laid out their plans for the site at a community meeting Tuesday evening.

Pluta isn’t seeking a zoning change, but he does need two zoning variations to build the apartments. The developer could build under current zoning parameters, but only with 24 apartments.

Of the 27 total apartments, 21 would be three-bedroom and six would be two-bedroom. Rents are expected to be between $2,000 and $2,500 per month, according to Kupiec.

None of the apartments would be reserved as affordable housing, since the developer isn’t required to do so. The city’s affordable requirements ordinance doesn’t apply to his project because it’s not on city land and doesn’t require new zoning or financial assistance from the city.

Some neighbors at Tuesday’s meeting took issue with the rent prices. They said the prices are too high for Avondale families.

“To be perfectly blunt, no family can afford $2,500 a month in this neighborhood,” said Melissa Toops, member of Avondale Neighborhood Association.

Kupiec defended the rent prices and pushed back on the notion that rents are going up only because of gentrification.

“This is not going to happen without a construction loan,” Kupiec said, urging neighbors to consider construction costs. “[The rent prices] are what he’s calculating to make a profit. $2,000 is not out of line for newer buildings.”

“This is a four-story building. This is nothing new, different or exceptional” for the stretch of Milwaukee Avenue, he said.

Toops asked the development team if they’d consider adding more architectural details so the building better fits in with other buildings on the block. Pluta was receptive to the idea.

Pluta said he has more than 20 years of experience developing in Chicago. He said his mother lives in Avondale and has for many years. The developer was quiet during Tuesday night’s meeting, as was Reboyras.

After the meeting, neighbor Elvis Guzman told Block Club he wishes Reboyras would take a stand and demand developers in the 30th Ward include affordable housing even when it isn’t mandated by the city.

An increasing number of small residential developments are popping up in Avondale’s 30th Ward, a sign the neighborhood is getting hotter as gentrification continues to move north.

Guzman, also a member of the Avondale Neighborhood Association, said he and his parents have lived in Avondale for about 15 years, but his parents, who have a combined income of $60,000, are finding it difficult to stay in the neighborhood they love.

Guzman said his parents are considering moving out of state in search of cheaper living expenses, “which is really unfortunate because it’s the only neighborhood they’ve known.”

He said he’s worried the new apartment complex and others like it will make it even more difficult for people like his parents to stay in the neighborhood.

There was no talk of the closure of Red Apple Buffet at the meeting, even though it closed to make way for the new development.

The all-you-can-eat restaurant, known for its wide array of cheap Polish food, served its final customers July 7 after 30 years on Milwaukee Avenue.

Co-owner Anna Hebal said she and her husband Ferdynand, also her business partner, sold the property to Pluta in December with the intention of downsizing.

The restaurant owner sees the change as a good thing.

“It should be obvious now. The neighborhood is developing pretty quickly now. All of the developers are coming into Avondale and they’re trying to build taller buildings, condos and some commercial spaces — that’s what it is here.”