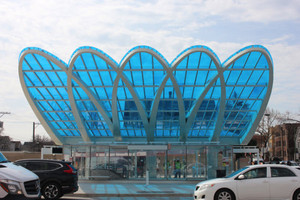 The CTA has finished work on the redesigned Belmont Blue Line station in the Avondale neighborhood, a $17 million project that includes a dramatic blue canopy.

The completion of the station is the biggest project so far under the $492 million “Your New Blue” program to modernize and improve the O’Hare Branch of the Blue Line.

“This project, like the dozens of others completed by CTA under Mayor Emanuel, is more than just an investment in transit, it’s also an investment in the surrounding community,” said CTA President Dorval Carter, in a statement. Carter and Mayor Rahm Emanuel are expected to formally cut the ribbon on the station on Friday morning.

The station’s steel canopy was designed by the Chicago architecture firm Carol Ross Barney. It resembles either a bird in flight, a butterfly or the top of a 1950s drive-in, depending on your perspective.

The Belmont station is one of the busiest on the CTA system, with 1.8 million entries to the Blue Line annually. It also provides connections to the popular No. 77 Belmont and No. 82 Kimball/Homan bus routes, and is part of a gentrifying area on the city’s Northwest Side.

The project is the first major renovation of the station since it opened nearly 50 years ago. Other improvements include a safer and modernized bus arrival and departure area, with LED lighting and additional overhead heaters; a prepaid boarding area, so riders can pay before they get on the bus; new LED lighting and repainting throughout the rail station; and new concrete platform decking, the CTA said.

What it does not include is an elevator to make it accessible for the handicapped. The CTA has said that the footprint of some stations makes this renovation difficult and expensive. The stations immediately northwest and southeast of Belmont, at Addison and Logan Square, are accessible for wheelchairs.