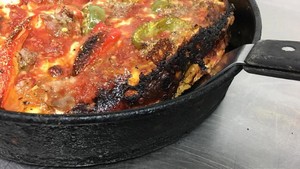 “I'm a big believer in not making any small plans. I really want to make this a signature property there," the owner said.

IRVING PARK — Legendary Morton Grove pizzeria Burt’s Place is coming to Chicago — but its owner says there’s still a lot of work to be done before you’ll be enjoying a Burt’s pan pizza in Old Irving Park.

Burt Katz, who died in 2016, was the founder of the original Pequod’s Pizza in suburban Morton Grove. He sold it before opening Burt’s Place in 1989. Ever since, the pizzeria known for its caramelized crust has attracted rave reviews and tourists from all over the world.

Jerry Petrow, who bought the business from Katz before he died, now has his sights set on Old Irving Park for the pizzeria’s first city location. Specifically, the former Thirteen Pins Tapas + Bar, 4202-4 W. Irving Park Rd., which was shut down in 2018 by state authorities for operating without a liquor license.

The building at 4202-4 W. Irving Park Rd. was recently purchased by the owners of Burt’s Place in suburban Morton Grove.

Over the past few years, the opening of Eris Brewery & Cider House, Chicago Taco Authority and Finom Coffee in the same four-block radius caught Petrow’s eye and added to his interest in the area.

“I really love the neighborhood,” Petrow said. “There’s definitely a freshness to the whole scene in that area right now.”

Petrow, who said he drives all over the city taking his five kids to and from school and sports practice, said access to public transit, the expressway and adequate street parking made Irving Park a perfect location for a bigger Burt’s. It’s also not as crowded as neighborhoods like the West Loop or River North.

“It’s a double lot and I’d like to go up another story,” Petrow said. “Right now I’m doing a bunch of structural engineer testing, and trying to figure out exactly what I can and can’t do. So it’s still kind of early for the news of us expanding to be out there.”

As soon as the Old Irving Park Neighborhood Association, a community group active in the neighborhood, posted on Facebook about Petrow buying the building on Monday night, he started fielding calls about his plans for the space.

Petrow said he wants to get neighbors on board before embarking on the extensive city permitting process.

“The reason the cat’s out of the bag, so to speak, is because going through the permitting process and talking to the city, you really need neighborhood support,” he said.

“I’m a big believer in not making any small plans. I really want to make this a signature property,” Petrow said. “And there was some crazy stuff going on [at Thirteen Pins]. So I’ll have the demons exorcised out of the place, definitely.”

Petrow said the new location would be bigger and have a larger menu, but will of course stay true to the signature pizza that has made Burt’s so iconic.

“I’m thinking of collaborations to expand the menu on several different fronts. Burt’s menu is very focused on pizza. It’s something we’re very proud of. But we want something at the new place that also stands on its own,” he said. “Making the menu unique to that location. Family-friendly but with a city spin on it.”

For the latest information on the new Irving Park location follow the Facebook page for Burt’s Pizza.