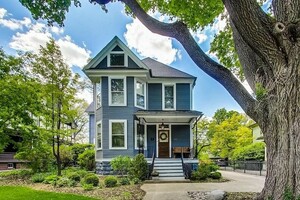 In Chicago, there's less reason to fear a big drop in home prices lies ahead than in most other major cities, two new reports indicate.

More people own their own homes outright, without mortgage, in Cook County than in any other big U.S. county, and affordability isn't disappearing as fast here as in most cities, the reports say. Both scenarios provide some protection against a big price drop.

There's a bigger share of homeowners with a paid-off home in Cook County than in nearly any other big U.S. county, according to data that Attom, a real estate analytics firm, prepared for Bloomberg News. A large share of free and clear residences in a market "suggest(s) it's better shielded from a decline in real estate prices," Bloomberg reported Monday.

Among counties with more than 500,000 homes, Chicago had the third-highest proportion of paid-off homes, just under 30%. The others in the top 10 were all in warm-weather states that have big concentrations of retirees, a population group where having no mortgage tends to be high. Among them were Florida, Texas and Arizona.

Nationwide, about 34% of homeowners have no mortgage.

Because of its sheer size, Cook County has the largest number of paid-off homes on the list, more than 397,000. New York County, which contains Manhattan, has a higher percentage of homeowners without a mortgage, 59%, but the number is relatively small because two-thirds of Manhattan residents are renters.

Another protection against a big drop: Chicago-area households' home-buying power didn't lose as much strength as most other big cities in the boom. That's according to a Nov. 15  report from Redfin, an online real estate marketplace.

Nationwide, the cost of a typical home went up 46% over that same period, according to Redfin.

Better affordability of homes in Chicago, which has shown up in several other reports measuring the impact of the housing boom, clearly offers a measure of protection against a buyer revolt that could drive prices down.

The annual income needed to buy a typical home in the Chicago area in October was about $81,000, according to Redfin. That's lower than nearly all the other 20 largest metro areas. Only Philadelphia is cheaper. Buying the typical home there requires an income of about $69,700.

In its report, Redfin trumpeted the other Chicago-area metropolitan statistical area—the Lake County, Ill., and Kenosha County, Wis., area—as the nation's biggest winner on keeping its purchasing power. The cost of buying a typical home there went up 33.5%, the least among 92 MSAs studied. But that's due in part to a decline in the median price of homes sold, down 4.9% in October the same time last year, according to Redfin.


Being more able to afford homes because they cost less is not so much a bragging point. In the Chicago MSA, the median price of homes sold in October was up about 2.4% from a year earlier, according to Redfin.

Here's one more data point that might allay fear of a big drop. Last week, Crain's reported that home prices in the region were flat from a year earlier for the first time in over 120 weeks.

As it turns out, that week's flatness did not portend the beginning of falling prices—at least, not yet. In the following week that ended Nov. 14, the prices of homes sold in the nine-county region were up 3.7% from the same time a year ago.

Keep Up To Date