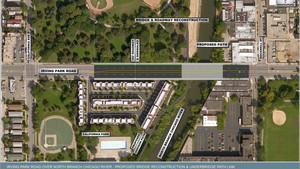 Once the project — including a path under the bridge — is complete, it will allow for a continuous path from Belmont Avenue to Montrose Avenue along the river. ---- IRVING PARK — A project to replace the 100-year-old Irving Park bridge over the North Branch of the Chicago River will begin construction Thursday, launching an 18-month construction project.

The new bridge will offer wider lanes and sidewalks to fit the current dimensions of Irving Park Road to the east and west. And it will have a path built under it, connecting Horner Park to the 312 River Run along the west river bank.

“The Chicago Department of Transportation finally locked in a date,” said Matt Eisamenbart, an aide with Ald. Deb Mell’s (33rd) office. “We’ve known it as a pending project for almost a year but now it’s getting to go, it should take about 18 months to complete the replacement.”

The current bridge has two lanes in each direction, and the new bridge will as well — but the lanes will be wider. Other improvements include wider sidewalks on the north and south sides of bridge with a new pedestrian rail at edge of sidewalk, new protective crash rails between road and sidewalk and new decorative and ornamental lighting.

Once construction starts this week, the north lanes of Irving Park Road will be reduced to one lane for crews to work on electrical conduits and remove some trees.

By April 8, the bridge replacement will start. Commuters should plan for lane closures and increased congestion and occasional two-lane traffic, but only during non-rush hour travel times.

To accommodate high traffic demand, replacement of the bridge is expected to be done in phases to allow four lanes of traffic throughout most of the project.